Nottingham Leander was formed in 1947/48 as a male-only club and affiliated to the A.S.A. Midland District and the Notts. A.S.A. and was run under the patronage of Nottingham hotelier, Mr Smith. The Club was largely financed and run by him to encourage male competitive swimmers and had a limited membership of twenty boys, who met at Noel Street Baths on Friday evenings. The Club naturally attracted many of Nottingham’s best swimmers, who were attracted by Mr Smith’s generosity, particularly when other clubs were struggling in the austerity of post-war circumstances.

From September 1952 and with the departure of Mr Smith from Nottingham to Sheffield, the club the re-organised itself on proper club lines with a committee and officers being voted for annually at an AGM. The inaugural meeting took place on 10th September 1952, Inspector Sam Davies of the Nottingham City Police being the first Chairman, Mr Bill Henson the Chief Coach and "Pop” Wheeldon assisting.

The first ten years of the club’s history from 1947/48 to 1958 were ones of solid achievement, whether under Mr Smith’s management or under the club committee and Leander prospered and was continually prominent in male County Swimming. During one year, in particular, the Club held every male County Championship. The club was annually represented in the Midland District and National Championships.

Swimming facilities in those days were poor being the period immediately post-war, and during the winter extra training was only available during public sessions, although the club was able to use the Meridian Pool (now no longer in use) most nights in the summer months.

In 1958 the Chief Coach, Bill Henson, left to form the Nottingham Falcon Swimming Club taking a good number of club members with him. This left the club in a weak state, but one of the good things that came about at this time was the formation of a club water polo team, in order to encourage older competitive swimmers to continue their interest in swimming when their competitive days were numbered.

In the ’60s with increasing membership, extra coaches and water space, and then finally by accepting female members in about 1966, the Club suddenly started to achieve results. (Up to this time, there were only two single-sex clubs still in existence in Nottingham: Nottingham Ladies and Leander: and the clubs would combine on occasions when it was necessary to swim against mixed clubs. This was not a very satisfactory arrangement for obvious reasons.) The club also endeavoured to encourage Nottingham Falcon Swimming Club and Noel Street Swimming Club to join with Leander to form a larger single club so that we could afford the services of a professional coach, which was new in those days, but after several months of joint discussions between the clubs, this came to nothing. However, it was obvious at this stage that Leander’s emerging strength and expansion was beginning to make it one of the leading clubs again in Nottingham swimming. In addition, the building programme for new smaller pools was assisting and making more water space available. With improved club membership and finances, Leander during the late ’60s was able to expand outside its Noel Street base to many of the we use today.

In the early our club colours were red and blue and our club symbol was a lighthouse. At that time Paul Hickling became the coach until career took him away from Nottingham and Bill Davis (a parent member) took his place. Bill’s dedication to swimming was a fore-runner to serious competitive swimming in the club as we know it now. His methods and techniques soon brought much success to Leander for all the years he remained at the helm coaching our swimmers. 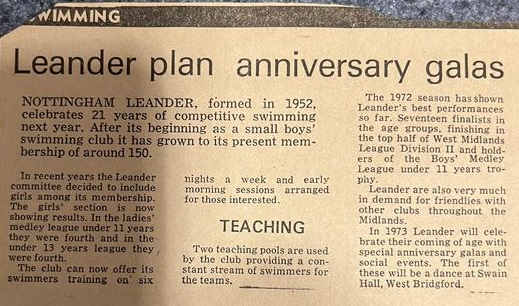 With the Notts County Swimming Squad (Nova Centurion) being introduced Bill Davis was invited to assist with the coaching of the top swimmers and Dave Crouch took over as Chief Coach at Leander and continued to carry the club on with its success. At this time it was agreed that we changed our colours to green and white in order that our club, which had committed itself to full support of the County Squad, could let its swimmers follow through the club and on to the squad without causing any immediate expense to the parents, it would also enable the swimmers to feel ‘at home’ from day one with the County Squad. Dave Crouch remained with the club until he took up a full-time coaching position in the North.

The most important facet of the development of Leander as a club was the appointment of Chief Coach Tony Holmes, in 1981, whose remarkable journey spanned 32 years. When he passed away tragically early in 2013 he left a great legacy not only of hundreds of children with a sense of purpose, discipline, and responsibility but also of a respected club which consistently ‘punches above its weight’ in competitions.

In 2002 the club celebrated its Golden Jubilee, and in December of that year, the club clinched its first ever National Final place. The year 2003 was the best year for the club – finishing 4th in the National Speedo Swimming League ‘B’ Final and finishing 4th in the Speedo Junior Inter-League Swimming Competition National Final. The club is presently the top Nottinghamshire club, being the Overall League Winners for the years 2001, 2002, 2003, 2004, 2005, 2006, 2007 and 2008.

April 2009, under Tony's leadership, saw a pinnacle reached with the club competing in the National Swimming League Cup Final (previously Speedo) at Ponds Forge, the first Notts club in over 20 years to reach this level.  Tony passed away in 2013 following a short illness, age 56.

Stephanie Brakespear-Handley was appointed as Director of Swimming in December 2018.  Leander are continuing to thrive and membership has increased. In 2019 Leander are the current Winners of the ASA stage 2 & 3 Leagues with trophies for stage 1 victories as well. We also had the best Arena result since 2014 Finishing 5th in the east Midlands. In 2019 Counties Leander had the most qualifiers of any club. We have also had Leander swimmers in Midland, English Nationals and British Champs in 2019.  Steph stepped down in March 2022 having guided us through the difficult COVID-19 lockdowns and return to swimming.

Nottingham Leander is named after a character in Greek Mythology.
Leander was a youth of Abydos, a town on the Asian side of the strait which separates Asia and Europe (the Hellespont). On the opposite shore, in a tower in the town of Sestos, lived the maiden Hero, a priestess of Aphrodite. Leander loved her, and each night he swam the 1300m across the strait to enjoy the company of his beloved, guided by a torch she put on the tower to guide him. One stormy night the torch was blown out, Leander couldn’t find his way and he was drowned. Subsequently, Hero saw his body washed up on the shore, and in grief, she threw herself from the tower and was drowned.

Support us from the comfort of your own home. Your everyday shop, taking out insurance, or booking a holiday and more means we will receive free unrestricted funding. We’re using easyfundraising, a free fundraising platform, when you shop online at over 7,400 brands, they donate. Free and easy to use, it’s a great way for you to support us without it costing you a penny. Sign up for free.